The “Heath River Centre Lodge” is on the Heath river, which marks the frontier between Peru and Bolivia; nothing to see except some local miners looking for gold. 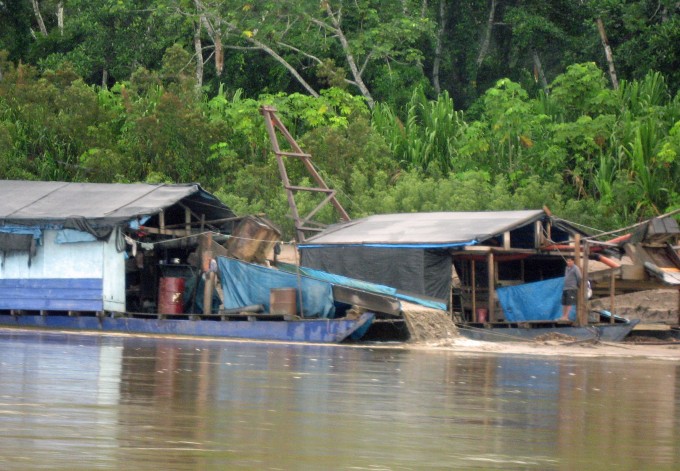 Soon after leaving, except the splendid crescent of the moon, the night was complete. The boat had no lights and followed the indications of someone lightening the river with a torch in one’s hand. The silence in the purple night was unforgettable, that was a great moment!

The hotel was far from any human life; we were the only guests having the privilege to enjoy the complete quietness of Amazonia. There was no light in the room, just two poor candles allowing us to move safely; the best thing to do was to go to bed listening to the soft talk of the vegetation.” 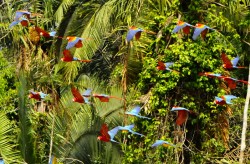 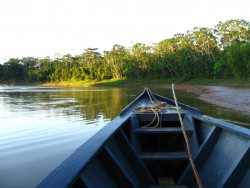 We left the following day at 5.30 am to see the macaws. We had around 30 minute boat to reach a hide: a floating “house” in the middle of the Heath River, it was misty, quiet and we felt a strange serenity…The water was carrying some pack of foam like industrial rejection which surprised me so far away! In fact it was only dry leaves, which after falling into the water, decomposed themselves with bacteria making a kind of soap, it was not pollution, but just a natural process! 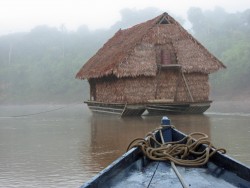 The wake up of nature is always wonderful. First nothing happened, and then the birds came progressively and by groups. The “show” began at around 7am with the arrival of the green parrots and at 9 am it was the red & green macaws turn. 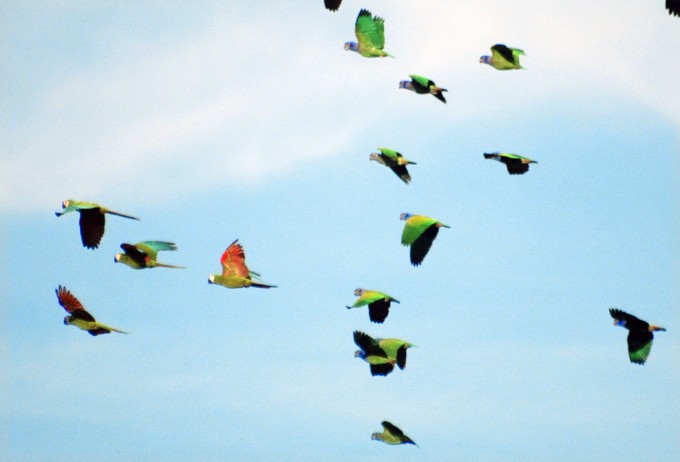 The green parrots are smaller and with a short tail. They wear feathers on the head and up to their eyes on the contrary to the “red & green macaws which are the largest parrots and with a face completely bald; their tails can be longer than their bodies… They have sharp hooked bills and strong enough to break nuts. Their 2 toes pointing forward and the 2 other pointing backward, allow them to grasp their food. 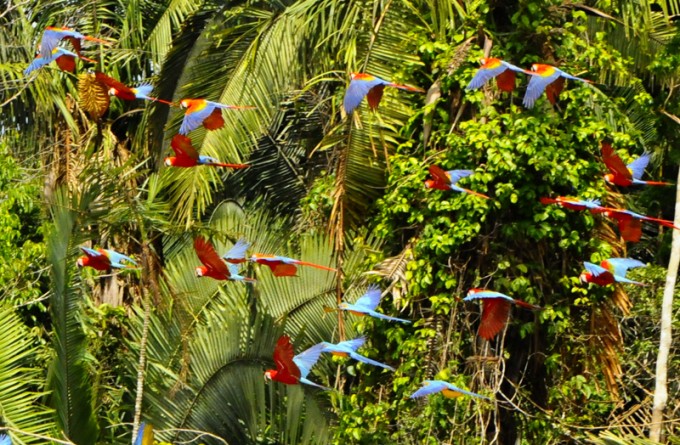 They come every morning to the “clay lick” obviously to lick the clay from which they find their vitamins, and also to get from it a protective effect against any poison they could eat with their food. 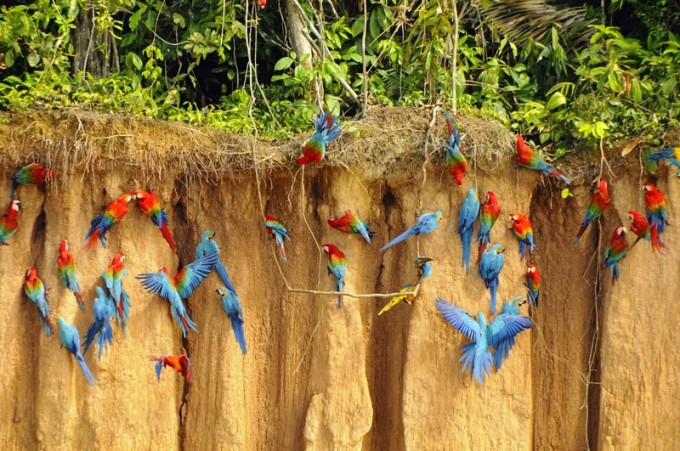 We noticed some of the red and green with a yellow “patch” on the back, it was another type called “scarlet macaws”. Most of the time they nest in the holes of the trees. They live in couple and lay 2 eggs each year but keep only one “baby” alive”. Their main predators are eagles.

It is a spectacular moment which can be interrupted at any time, the macaws are very shy and attentive, that was confirmed when a small and inoffensive squirrel strolled on the clay, suddenly all the macaws flied away and did not come back leaving us with some disappointment. But we were lucky, as we had reckoned more that 50 macaws, knowing it was not the best period to see them.

The weather was changing also very quickly, and we waited in the shelter looking at a sudden tropical shower on the Heath River and observing some “dusky tiki monkeys” manifesting their presence just after the wet. They were very near and their shouts very powerful, we felt integrated in their world, and were now listening to their talk with others in the deep bush. 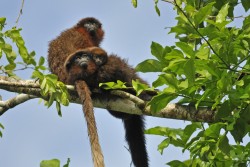 The banks of the Heath River mark the frontier between Peru & Bolivia and the strong rains cause damages, which normally bother nobody. In this case, it is quite different as it is a constant fight between nature and people of the eco-tourism hotel.

The lodge is in Bolivia and under an American control. The flood with the time is changing the course of the river and if nobody from the lodge stops it by strengthening the bordure, the hotel will be soon in Peru, which will not authorize the concession. 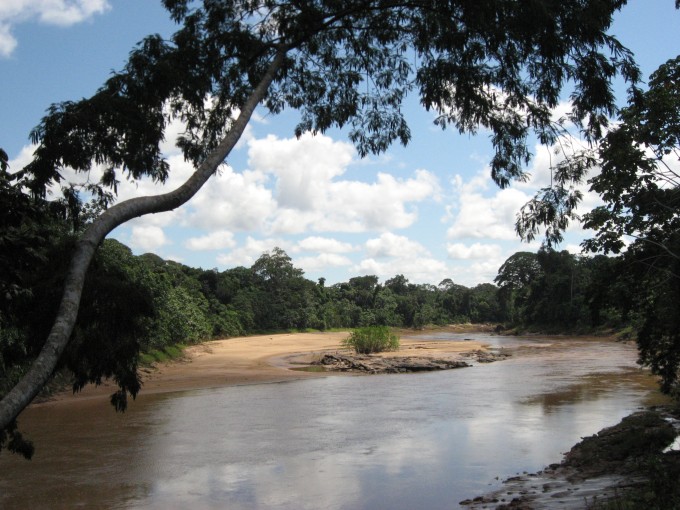 The clay lick is on the Peru bank side. If the eco lodge on the Bolivia side became Peruvian, it would have to close because of Peru laws. Therefore, it would be impossible to have the great chance to observe the red and green macaws on the “clay lick” which is too far away inside the uninhabited jungle and that would be a great loss for everybody. 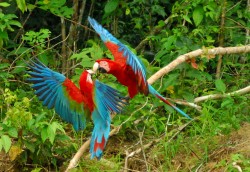 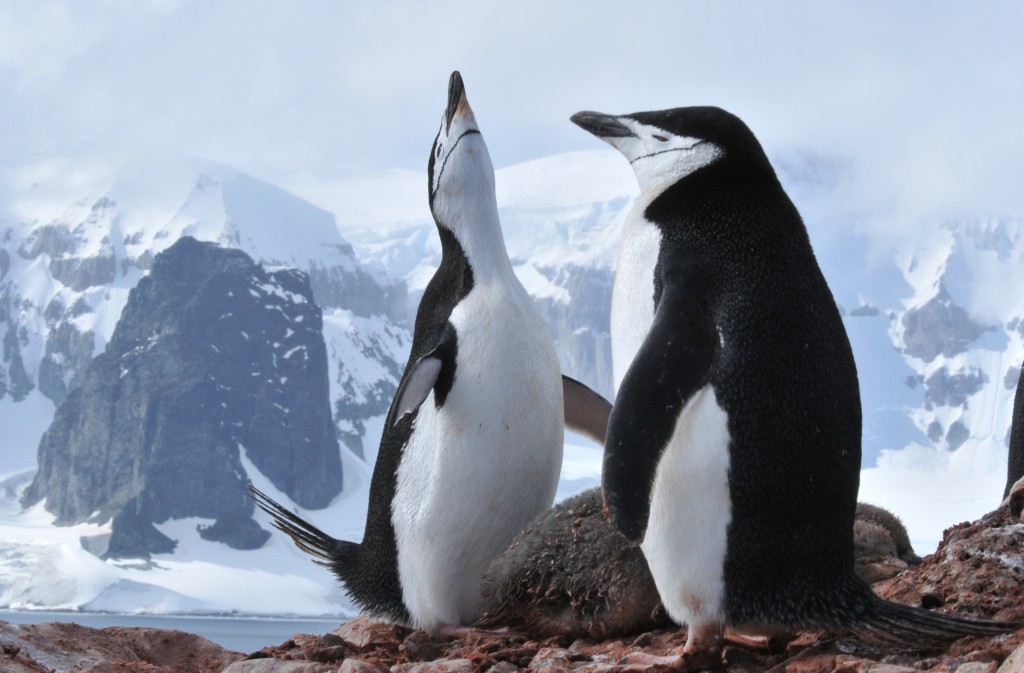