After 7 hours drive from Kampala with a boring driver who did not say a word, we arrived at the hotel near the park of Bwindi at the end of the afternoon. The hotel was in the lush at the foot of the gorilla mountains. The view was beautiful and the number of rooms being quite limited, we were very few people. 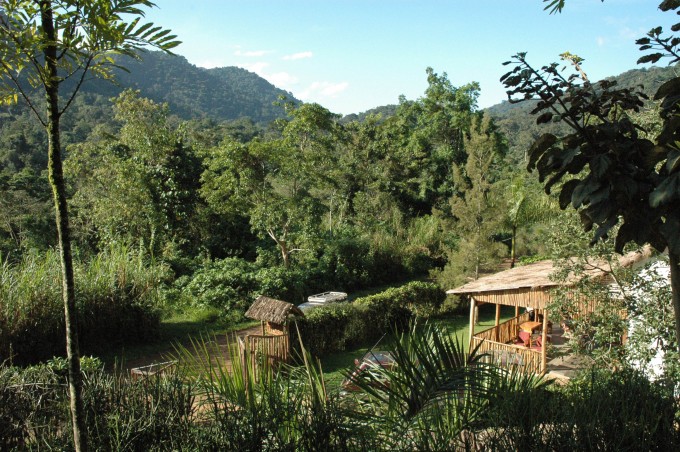 At 8.a.m. the following day we were taken by our big fat lazy driver to the entrance of the park. Some people were already there, coming from other places. The chief came soon to make a speech on the next trekking and gave us all the supposed precious advices but I did not get a word until I realized that the strange word “gouas” was in fact “gorillas”. I always need some time before getting used to the different accents of the countries. Apparently, I did not miss much about the talk, having “translated” the most important word, I could repeat proudly that I was going to find the “Gouas” ! We were dispatched in several groups of 6 to 8 people, each group looking for a different family name of “Gouas”. I understood then the question of a young man asking me in which group I was, I just said “I am not in a group, I am travelling alone…” I was “novice”, he smiled and did not insist! The groups being formed, we were only 6 people going to track the oldest family. Then the responsible presented us to the porters, I got a lovely Uganda girl to help me, she was also very nice and friendly and we could start surrounded by all the porters, the guides and two or more armed rangers. 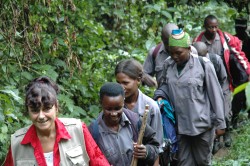 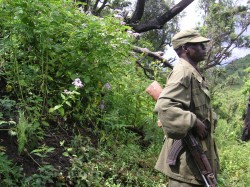 At 8.30 we began to climb, I was surprised as there was a small path going up inside the forest, but the impenetrable jungle was far from here. After two hours climbing non stop at a “high” speed, I looked at the others taking some delay and I began to find the “stroll” a bit more sporting. On the way, we passed under a swarm and few bees dashed at me and only me! one stung me on the arm, I said “thanks to you but you will die now!”  I was wondering if it was really a wild bee or some other insect, but my porter confirmed to me that I will probably survive!!! (Sure to the bees…) So, we nearly “ran” 3 hours, I thought the top of this mountain was growing under our steps, I drunk a lot (of water), we had taken around 3 liters, they used to recommend  2 liters/person, it seemed much but it was not. We arrived at the top, not so high in spite of the long way and we sat for 10 minutes, the time to gather everybody. I thought we were near the gorillas now and that the more difficult was behind us. I was completely wrong, (sometimes, it is better not to know the truth), as we were only at the beginning of our efforts. 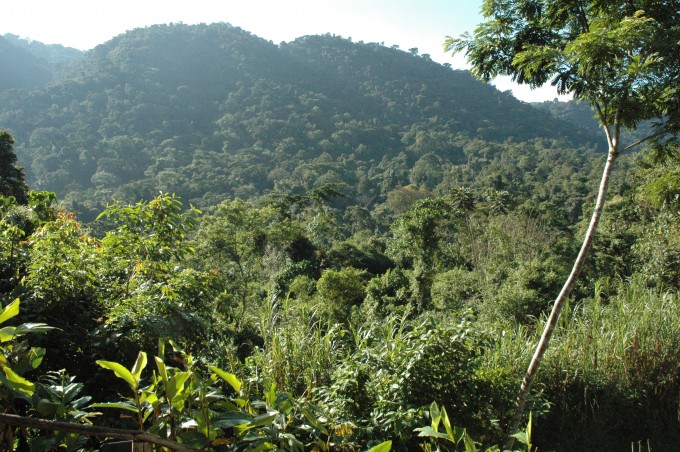 We began to go down on the other side, the vegetation was quite different, instead of the huge trees, we were surrounded by some bushes without any apparent or existing trail, we were entering the impenetrable jungle, and really, it was! I will never forget this impress to be the prey of nature. I was going to be eaten by this thick green mouth! The ranger was ahead, trying to separate the branches and most of the time cutting them to allow us to disappear in the heart of that moving green tide. Our horizon was no more than 50 cm when it was good. Sometimes the ranger vanished completely, and I though it would be terrific to get lost here! 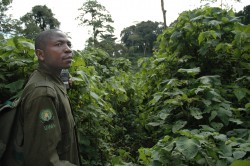 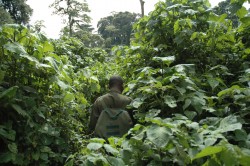 We moved under that green roof may be two hours; it was frightening, tiring but exciting. We were then really tracking the “Gouas” and they were well hidden! After turning and turning without any result, the guide came to the conclusion  that they had been moving since another tracker had gone to find them this early morning before we left! They always go before tourists to avoid a too fastidious track, but we were not lucky and had no idea where they had gone now?  That was the big question!!! We wanted to know better the “impenetrable jungle, I can say, that now we have got some experience about it…After walking in that thick bush, we just arrived in a quite different type of landscape, there was no more shrubs to protect us against the sun, we were “swimming” in a world of creepers and roots making big knots and it was really very hard to move. 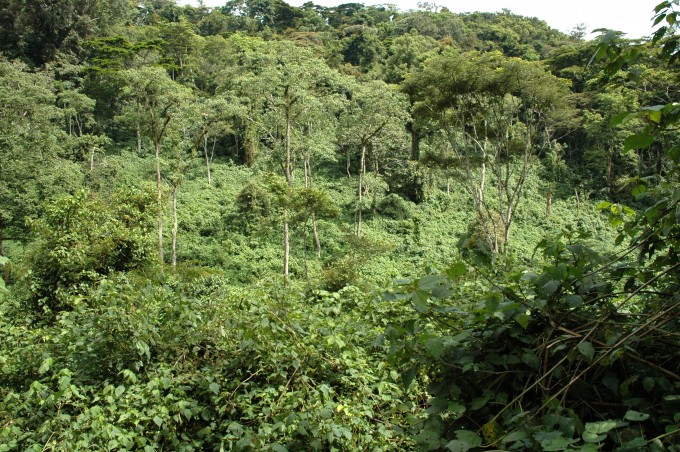 It seems we were walking on springs, fighting all the way with rounded branches. The sun had no pity and attacked us all along the way, in spite of our efforts, there was no prints of our dear “gouas”!!! The rangers led us at the same non stop speed as before and it was difficult to follow them, I fell down about 4 times, first on the bottom but also in front, the foot retained by the creepers which seemed to keep me in leading-strings, my tong was nearly going out, like a dog out of breath! But I was not an isolated case, Denis fell also several times, as well as the rangers. I could not see the others behind, they were swallowed most of the time by that vegetable voracious appetite!. We turned endless on the right, on the left, behind, in front, during a very long time, I began to think that I will never see my “gouas”, when we noticed  suddenly the bed  where they had stopped for the night, the vegetation was there completely flat, we were near, good, but the bed was empty! (Not so good) Then we found some droppings, I am not a specialist, but they were apparently not from human!!! I thought the trip would end soon, approaching them, and that gave me some courage first, until I realized they had moved again. So, like them we moved again, tracking and tracking, under the same sun, then again some slopes down, and some slopes up, no end! I don’t know how many hours this search was lasting, but it seemed to me endless! Suddenly, we were required to stop and keep silent. The ranger pointed out some moving shapes : the “GOUAS” were not far, we could listen the noise of the breaking branches, we were back again in the bush, and it was difficult to perceive them. 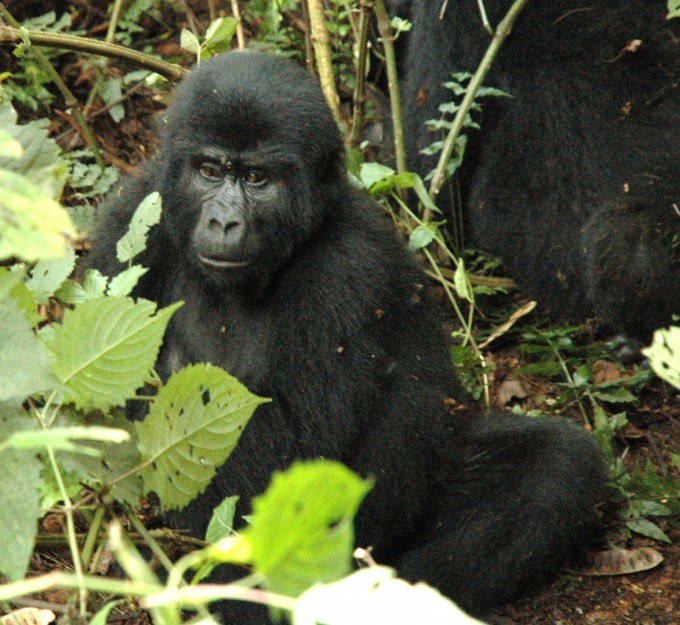 They were in the shadows, no light, the flashes were forbidden, that was a sad experience to be so near but without any visibility at all! We could not accept that, and we concentrated our last strengths to approach them, crawling on the floor to enter inside that oppressive jungle; I had to jump over a very big dead trunk, it was not easy, I rode it, but stood blocked, I could not go down as there was a big hole on the other side! Finally I decided to let me fall down in that basket of leaves, branches and so on. The last meters of the track made me think I was a soldier during the war in Vietnam; nobody spoke, all concentrated on our living targets. 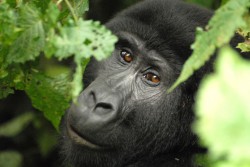 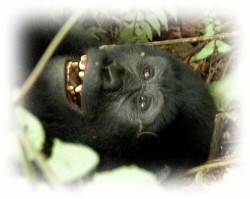 We stopped crawling as one animal was lying quite near on the floor, I was not frightened, he had a very nice expression and seemed soft and friendly. He was looking with some compassion in the eyes for these human beings coming to disturb the intimacy of the troop. We were staring at him, using our strange noising boxes; obviously, he could not understand the repeated “clicks” of our “picture boxes” and after a while he decided to show ostensibly his back to the new arrivals. Then, may be bored of our quietness, he moved a bit to meet a female which did not appreciate and they began to run around us shouting loudly ready to fight. It was not dangerous on a condition not to be on their way. 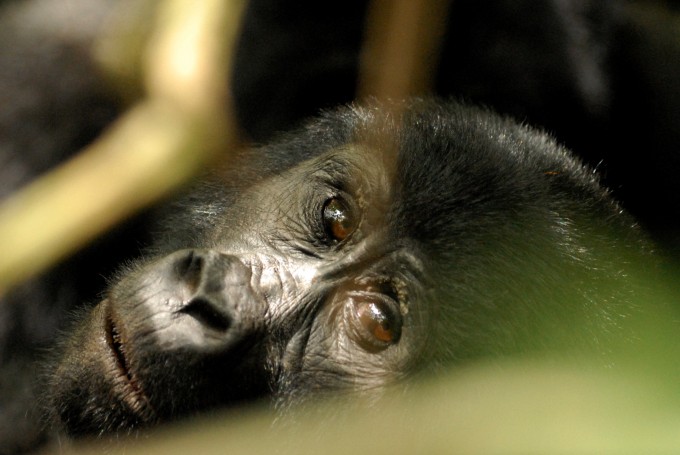 Then we tried to follow them again, I am trained to crawl in water, but on the floor with the “picture-pots”, it was not the easiest way. After few meters, we stopped again, I was peering in the shadow when suddenly I listened to a strong noise above me, I had not noticed there were 2 big “gouas” awaking in the nearest branches above my head and they jumped suddenly on the floor ; I did not even had time to be frightened as the surprise was great and they ran away very quickly. That was an unforgettable moment. We tried to follow them, walking the same way, with our “four” legs, but with our bottom a bit higher than them. We were then luckier, one “goua” was sitting in the sun and at least, I would be able to take better pictures. Everything was perfect except with 2 other antipathetic “humans” (Europeans) which arrived slowly and peacefully to require my seat. Being much younger than me,  I applied « the law of the jungle », the first arrived gets and keeps the best place 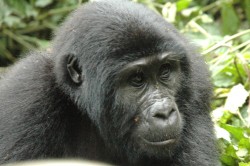 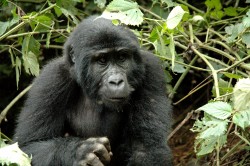 So I took pictures of the sunny one, first from behind, until he decided to move on and face us, that was fantastic! We were all in admiration on these wonderful creatures. I felt I was Diane Fossey as a small one approached the ranger sitting near us; with shyness, he touched his boots looking at us straight in the eyes, I was fascinated, I would have liked to caress him like a cat, but I preferred to keep cool to avoid some disillusions!!! Normally, gorillas leave in troops which can reach up to 30 animals; I don’t know how many they were here, difficult to say but less. Males and females go together with a lot of babies but all of them have to be under the responsibility of a big patriarch called a silverback which is quite different from the other gorillas. He is very big, nearly 2 m and heavy, around 200 kg, he behaves as the chief and the protector of the group. He decides everything such as to move to get new food; gorillas can eat up to 15 kg of plants and fruits and they never sleep at the same place, the choice remains the Silverback decision. We were not very lucky as we found our silverback just before leaving the place, he was sleeping like most of the time under some thick bushes and it was difficult to approach him, I could just see his grey back and took a picture of his hand on the floor which appeared to me of a giant size. Unfortunately, I could not see his face, but I think if he had stood up I would have been very impressed and probably scared! 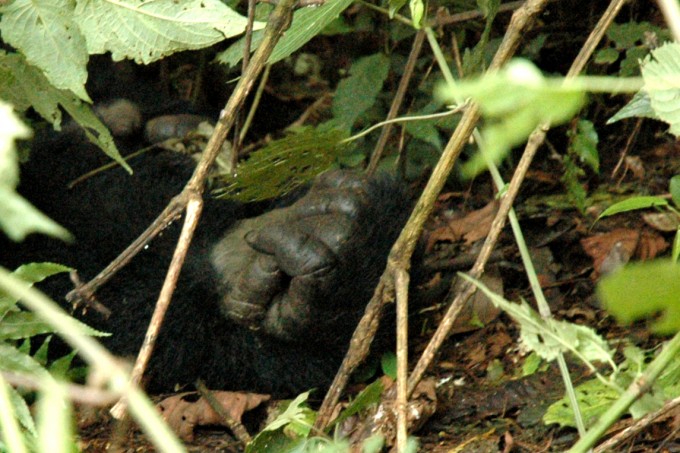 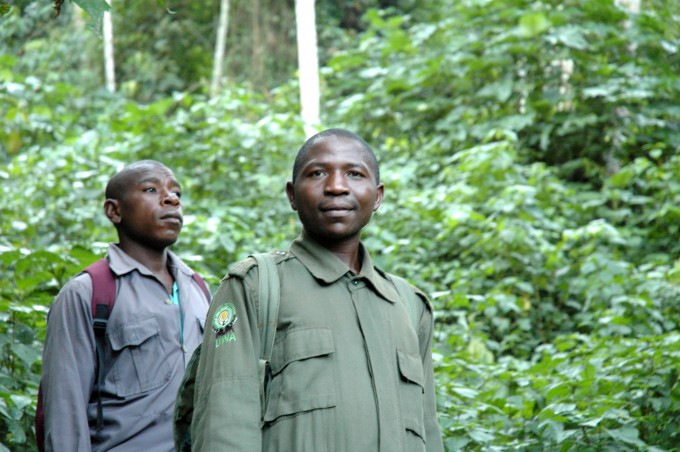 The way back lasted about 3 hours of walk again, we took another way much more beautiful than the first one, among plants, bananas and blooming trees, it was an Eden garden, I would have liked to ask on the way back 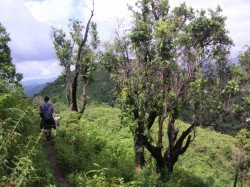 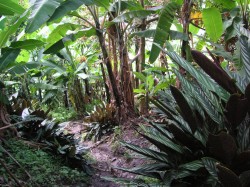 Instead of that we ended the track meeting our big fat lazy driver waiting for us and just complaining that he was coming for the 3rd time to pick us up, sorry, it was so hard for him to wait in the car. 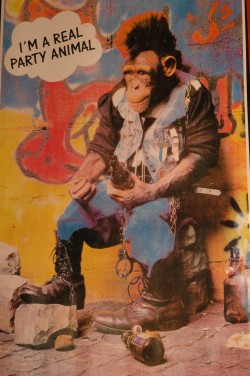 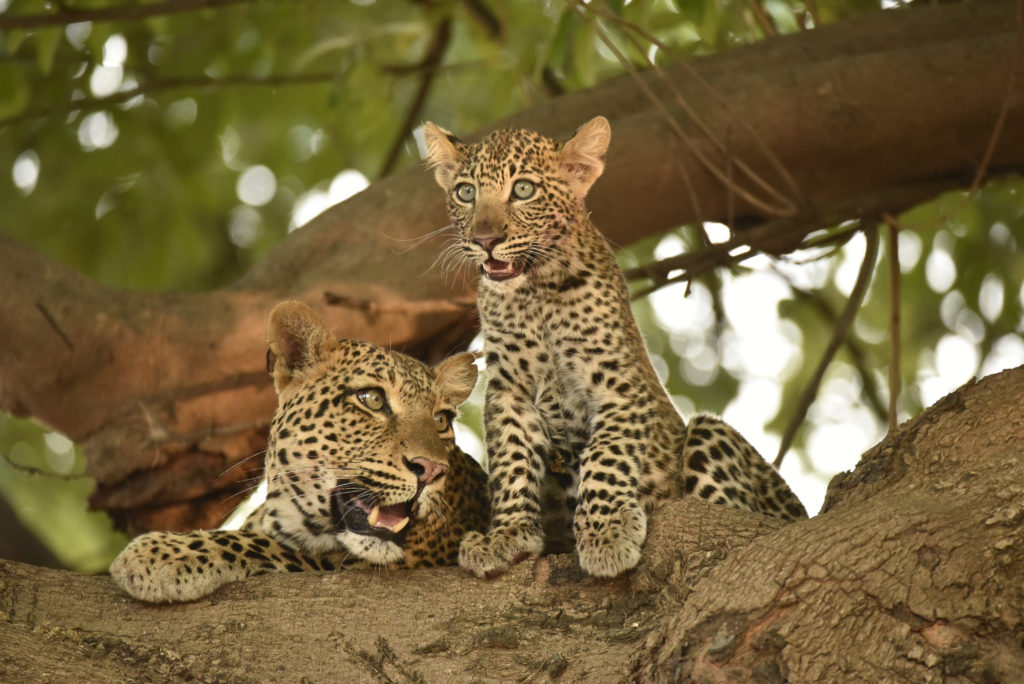