15/6 – After 2 hours of flights, we landed in Manado…
For those who thought North Sulawesi is only a luxurious jungle, be prepared to a shock, Manado is just a big over crowded town with a lot of traffic jams. 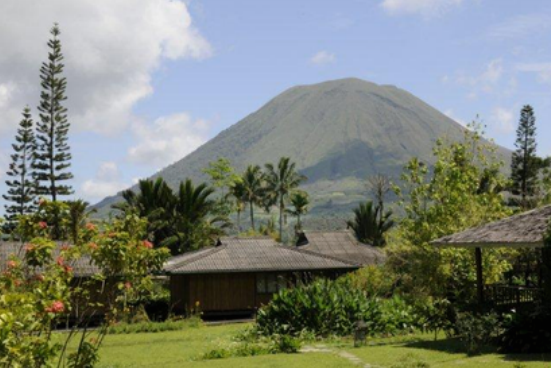 The traffic is everywhere, but the Hotel Gardenia Country Inn is a bit off the road and sets in a splendid green garden, which I should better call “Private Park”. In front of us stand like a painting the  imposing Lokon volcano which still erupted  last January. The restaurant on piles was very pleasant but the staff did not speak a word of English .

We spent the afternoon looking for birds, but in spite of some small ponds, we were surprised by the lack of wild life there.

The second day, I got a heavy fever because of kidney troubles and had unfortunately to spend the day lying in my bed wit antibiotics…that’s the real human life!

Morning, we met Freddy our driver guide, a very nice guy with a round face always ready to smile; we quickly felt very comfortable with him.

The minibus was like him, funny, it was painted with black and white stripes like a zebra, the true holidays car …when it works…

We had to drive to the Mahawu Volcano. He started the engine and we left the hotel.

After a while driving I noticed like a cloud around the zebra car, strange indeed! We got off as things were going worst, thick emanations were now going out through the four doors  of the mini bus, it was a true volcano eruption inside the car!!!The zebra looked upset and all the seats were now covered with a green nauseous liquid…

“It’s nothing” said Freddy, “don’t worry I will fix it, go for a short walk and I pick you up…”

If he said so…. we began to walk…It was a beautiful tortuous quiet road, climbing among rice fields. I was making some pictures when a group of 6 young men , with rainbow colors hairs, turned back they big motorbike at the view of the 2 European “macaques” on their way. We were soon surrounded with all the “ fighting” IPhones shooting on us, no way to escape but just smile and accept all the combinations of pictures for their memories. The farewell was funny, as hot as if we knew each other for centuries, a change for us!

A short time after, we saw the “zebra jogging along”, it looks ok, Freddy told us it was the “cooling liquid” which escaped and he had to replace it by all the mineral waters to comply with the taste of our Zebra car!!!

Arrived at destination, we left the car and climbed on foot about half an hour to have a view on the perfect but extinct crater of Mahawu;  the time to memorize it and we went down to drive to another volcano showing clouds of sulphur and boiling muds. That second place was very touristic with coffee bars  and terraces, but they sold only many sweet drinks at temperature which means 32°C…No existing fridge there!

Thirsty, we found on the way a local piles restaurant on the lake Tonado. with cool beers and grilled fishes (better to say grilled bones) but with a picturesque panorama  and fresh air for a small rest.
Then return to the lodge for the night.

At noon Freddy came to pick us up at the hotel, the next destination was “Tangkoko National Park”.

Arrived at 4 pm, we left at 5pm to see the Tarsiers, the smallest existing primates hiding on the slope of the mountain, it was late and we had to climb quickly as it was already dark overall in the forest. On the way, we tried to take pictures of a “bear cuscus”, beautiful animal that I never saw before. It is an arboreal marsupial only found in some islands of Indonesia. 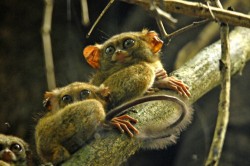 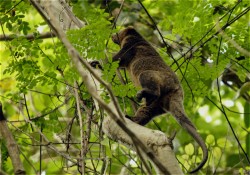 Finally we also found the tarsiers but it was too dark to make good pictures.
The return in the night was a bit difficult, and I could not see where I put my feet in the forest, the guide being ten meters ahead with a small light, and the moonlight at around 400.000 km from the earth!!!

Wake up at 5 am, this day I discover the crested macaque, they live on a flat area in the forest and move in big groups. They are classified in the last category of still living animals: “critically endangered” just before the category “world extinct “. That makes me sad, as they are so funny, expressive and clever!

After a moment, they all moved toward the river near the sea. Their attitude was a bit different, and after a time, they began to forget me, I could see their ablutions, their fights, their moments of cuddle, their kisses, in brief a life not so far from ours. 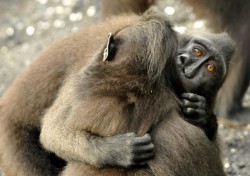 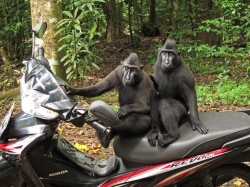 In the afternoon, we went back to the tarsiers, but sorry to say so, I was saved by the rain in the mountain and we went back.

The planning being changed, we were proposed to visit the port of the near village of “Batu Putih” .
We parked the car in front of a wide open bay with black sand  and palm trees running along the beach and began to observe children enjoying a  bath in the small waves. Around, a lot of colorful boats were nearly ready to leave for the night as soon as the fishermen would have finished preparing the nets. 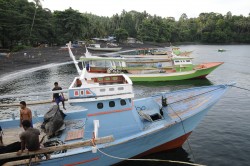 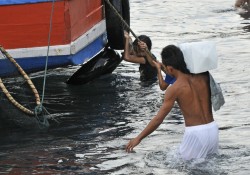 In the meantime, blocks of ice were unloaded from a pick up; a man carried one on his shoulder walking into the sea up to the boat and there a boatman with a conic “shrimping net” was waiting to haul the ice on board.

The men going at see, the women spend the night alone in the village (well…we suppose so!), at dawn they go back to the port when the boats are returning. They collect the fishes and go to sell them in the next villages.  Married couples are just crossing, is it good or bad? That’s the question!!!

Looking far away, I was astonished by very small floating houses with a sharp wooden roof, they looked like doll houses and were about 2m2; I was told it was a trap for fishes.

At the night, they put lights, which attract the fishes inside a net under the small house. They have just to haul it up full…Quite human that! 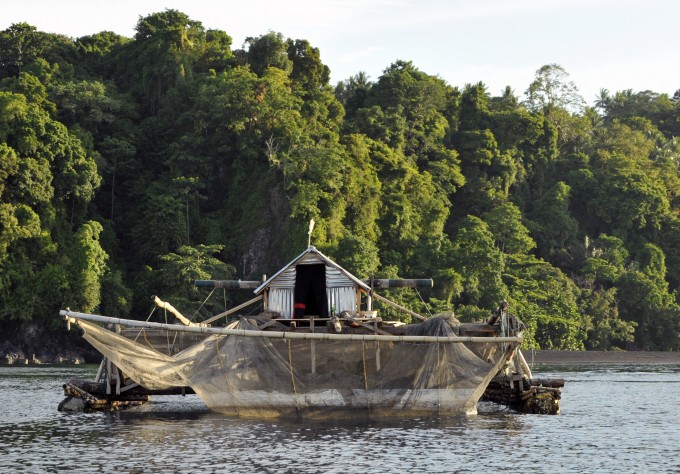 The return to the hotel was a bit complicated; when he left the port, Freddy was inattentive, looking at a boat construction or at the young woman aside…Never mind, the result was a deviation of the zebra car, which stuck in a kind of black farina. The front wheel was deep in the lava and after a while, the rear wheel also stuck up the axle-tree. I though we would go back to the hotel by feet. Fortunately, about 10 people came to help but it took a moment to deliver us. On the way back, the event was already known by everybody and we had a lot of fun. 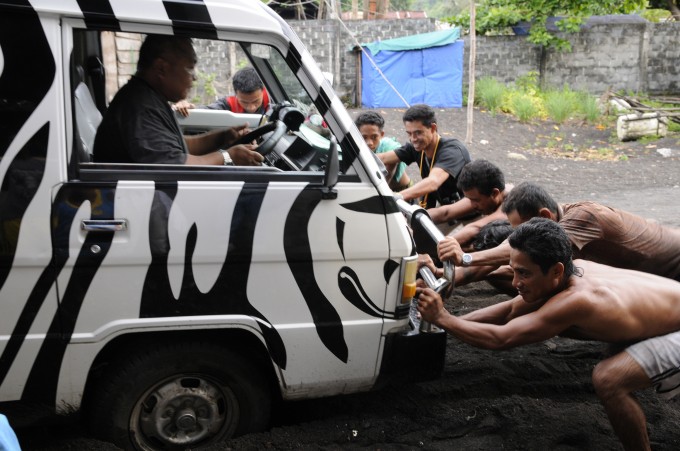 21/6 – Batu Puthi – Departure in a small catamaran to visit the mangrove , the trip on the sea was pleasant but on the river, there was no wildlife apart an endemic “lilac cheeked Kingfisher” which allowed great pictures.

This morning we went each one on our side, Denis went in the mountains, followed by a stupid couple of tourists which had no car and managed to use ours. The problem is that they were very unpleasant and acted as if they were alone with the guide. It did not last too long to get rid of them!

The man with an old camera and a 200mm zoom never stop shooting birds very far in the darkness. As he could not see, he was just moving his camera according to what his wife said from her binoculars “left, high, down, right…” and this lasting for 20minutes or more…He never saw that before!

On my side I went back to meet my “untamed chaps” the crested macaques. First they were only 2 or 3 but after a short time they came in a big group on to the beach and also among flowers growing in the sand. That was a regal.

I had the chance also to see the flying lizard, it measures about 10cm, sometimes it opens its yellow wings and flies from one tree to another, I saw it but had no time to react 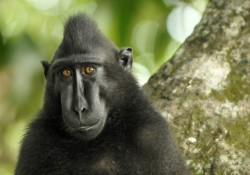 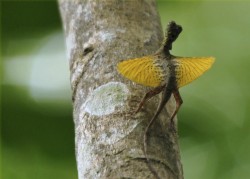 Afternoon, back in the mountain, we tried to locate again the bear cuscus when we were stopped by a powerful beating of wing. Peering around us, we suddenly saw the endemic “knobbed Hornbill” showing its delightful vivid colors on a close branch. 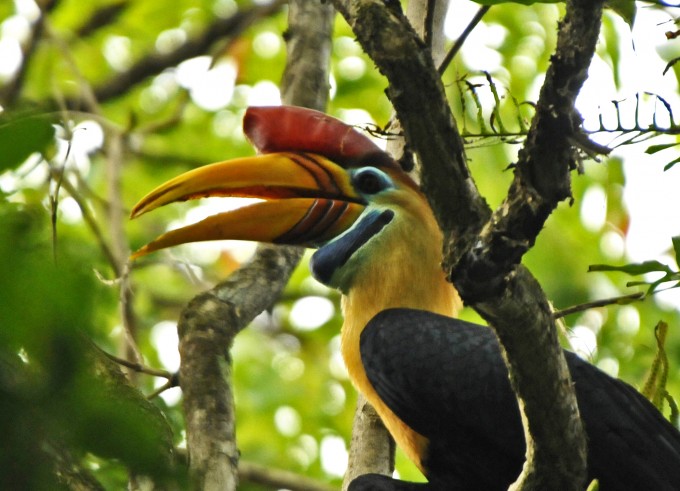 It was the day to leave the main land for the famous island of Bunaken and Freddy took us to our private boat, 50 minutes later , we were welcome at the hotel. It is composed of few bungalows on the slope of the mountain; the place is basic but sufficient with that temperature and the owner did his best to please the customers. Whereas most of the resorts on Bunaken Island gather on a same boat divers and snorkelers, here it’s different, we go any time we want with a private motorized small boat and stay as long as we want.

The price is cheap compared to other countries and the vivid colorful corals are a delight. The fishes are not big but in great quantities and I felt like swimming in an aquarium. The underwater “cliff “ is near with bigger fishes but the colors are fading with the depth. 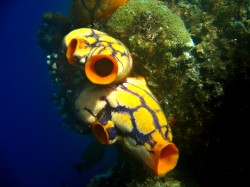 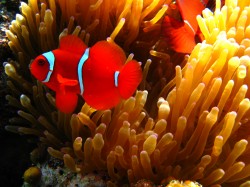 That was an amazing experiment still possible in our century, yes  still possible but for how long? Overall if I add that unfortunately the locals are not very concerned by that treasure. The water carries plastic bags, bottles, coffee cup and so on… I saw the staff of the regular public transfer boat to the main land throwing wastes out of the boat.

Tonight we had a big storm, it made a terrible noise and we had to run after our past drying clothes outside. The curtains of the room were flying as well as outside, and the electricity was off. It was a bit impressive.

After a lot of big showers in the morning, we hesitated to go snorkeling and chose to wait. As it did not rain during the previous hours, we decided to leave for our snorkeling trip. The underwater remained quite clear and nice when suddenly we had to rush inside the boat, as a new terrible tropical rain was back like a fatality. The visibility was “0” and I am wondering how the boatman could find the way back. The trip seemed to last an eternity and we were freezing.

Back, we just run in our room to take a cold shower “to be warmer”… just a question of imagination!!!
The rain stopped around 6pm, it was too dark to go out now, so I sat at the terrace of the hotel overlooking the sea and began to transfer my pictures on my computer. 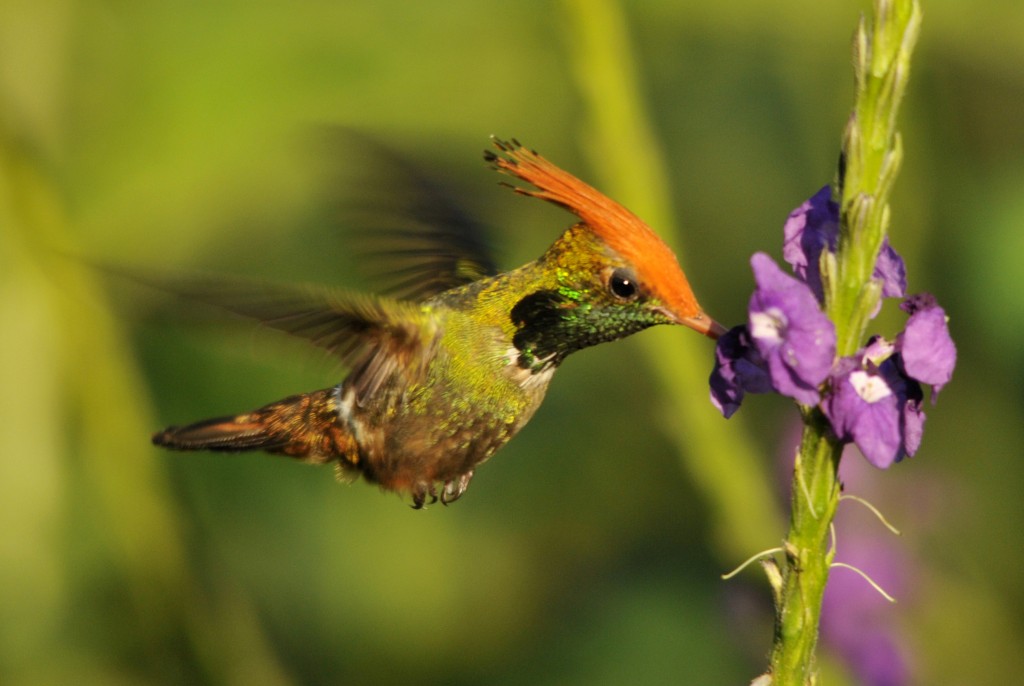